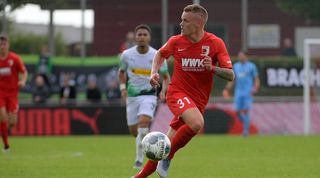 The Catalan club are on the hunt for a new left-back and Sport claims that Max is their top target, ahead of Wolfsburg’s Jerome Roussillon.

However, the Champions League holders could provide stiff competition as they are already in talks with the Bundesliga outfit over a potential deal.

Jurgen Klopp’s side are short of a back-up left-back after Alberto Moreno joined Villarreal on a free transfer this summer.

Augsburg will demand around €20 million for the 25-year-old, who provided four goals and four assists in 30 league games last season.

Although Max is the main objective for Barca, the Camp Nou club are also following Roussillon and sent representatives to watch him regularly at the end of the 2018/19 campaign.

The player has acknowledged interest from Catalonia as Barca look for a new arrival to compete with Jordi Alba.

That hunt could still take them to the Premier League, as talks have taken place with Tottenham’s Danny Rose, although a new arrival from the Bundesliga looks more likely.