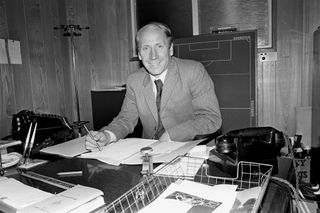 Sir Bobby Charlton will go down as one of the greatest to play the game.

A key member of the England squad that won the World Cup in 1966, he won medals aplenty at Manchester United.

Only recently toppled by Wayne Rooney as the all-time top scorer of club and country, the South Stand at Old Trafford was renamed in honour in 2017.

Only Ryan Giggs has made more appearances for United than Charlton’s 758 between 1956 and 1973, when he departed for a less successful venture at the Preston helm.

The move to the Division Two side did not quite pan out as planned, with North End relegated at the end of his first season at Deepdale.

Life in Division Three was not particularly easy either, with player-manager Charlton leading the side to ninth in 1974/75 before resigning early in the following season.

Charlton spent time with Waterford in the Republic of Ireland after leaving the post and went onto accept a boardroom post at Wigan, where he had a stint as caretaker boss during the 1982/83 season.