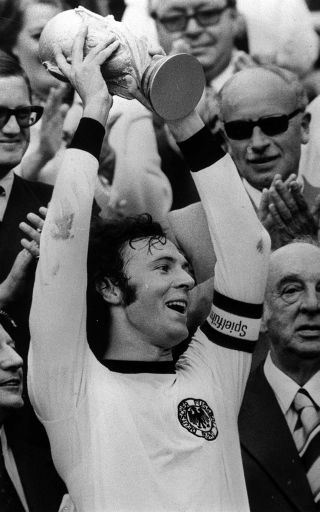 West Germany captain Franz Beckenbauer lifts the World Cup following their 2-1 victory over Holland in the 1974 final in Munich.

The 1974 World Cup final saw the tournament hosts, led by ‘Die Kaiser’ Beckenbauer, take on Holland’s ‘Total Football’ during an entertaining match at the Olympiastadion.

Dutch captain Johan Cruyff, who earlier in the tournament introduced the world to his now famous turn as he outfoxed Sweden defender Jan Olsson, went on a marauding run before being brought down by Uli Hoeness inside the penalty area with only one minute on the clock.

Johan Neeskens dispatched the spot-kick to put Holland ahead but West Germany were given a lifeline of their own from 12 yards when Bernd Holzenbein was felled by Wim Jansen, with Paul Breitner converting in the 25th minute.

Gerd Muller put West Germany ahead two minutes before half-time when he collected Rainer Bonhof’s right-wing cross before finding the bottom left corner for his fourth goal of the tournament.

That proved to be the decisive moment as West Germany held on to claim World Cup glory for the second time, in front of home support.

The 1974 finals, which was the first to feature a two group-stage format, also pitted West Germany against East Germany – in their only appearance before the country reunified in 1990 – in the first round-robin, with the latter winning 1-0.

Beckenbauer became the first captain to lift the FIFA World Cup trophy after the Jules Rimet was given to Brazil permanently following their third success four years earlier.