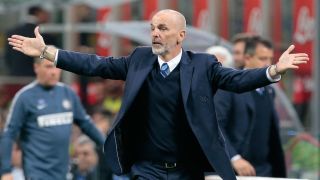 Inter coach Stefano Pioli insists his side's focus must be on a return to winning ways before they can contemplate the thought of Europa League football.

Having enjoyed a fine run of form to threaten a challenge on the top three, Inter have fallen away following a six-match winless run in Serie A and now find themselves three points short of sixth-placed rivals AC Milan in the hunt for Europa League football.

While Pioli is keen for his side to recover and secure European qualification, he is first aiming to give the Inter fans some much-needed cheer with a win at Genoa.

"In Genoa, I expect the right reaction - we have worked well," he told a pre-match news conference. "There is only one result we must achieve.

"It's time for us to get back to winning ways - it's been far too long. We must think about nothing but winning matches and doing the best we possibly can in these last four games.

: "I'm sure the experience gained this season will help to build a great future for this club" May 6, 2017

"There's not really much we can say to our fans - they're doing everything and more to get behind the team. They deserve an Inter team in the top spots.

"Regardless of any Europa League qualification, we must play to honour this club - that's all the motivation we need."