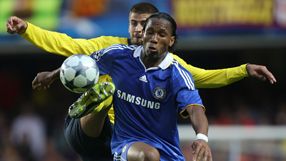 After Ashley Young hit the headlines following his 'dive' to win a penalty in Manchester United's victory over Aston Villa two weekends ago, Drogba also found himself in the spotlight for similar offences against the Catalans.

The Ivorian was accused of hitting the turf too often throughout the Blues' 1-0 victory over the European champions at Stamford Bridge.

"I trust players that every time they go down, something hurts. I don't think he should be criticised. Believe in honesty."

The Spanish giants will attempt to claw back a one-goal deficit at Camp Nou after Drogba's effort separated the sides at Stamford Bridge.

Both teams go into the game having endured tough contests at the weekend, with Chelsea preparing for the tie by drawing 0-0 with Arsenal, while Barcelona’s hopes of winning the La Liga title were effectively distinguished by arch rivals Real Madrid as they were defeated 2-1.

Speaking about their weekend defeat, the Spanish defender demanded that Barcelona should be given more respect and their La Liga dominance in recent seasons should be recognised.

"People talk too easily. We have to wait for other teams to win more titles," he said.

However, he did congratulate the Madrid side on all but clinching the title at the weekend but, insisted: "Next year, we'll be there."