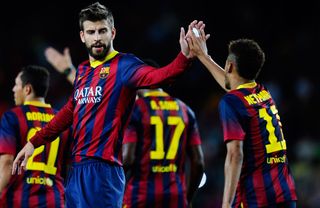 The 20-year-old completed a €57million move from Santos in May, and has become an integral part of Gerardo Martino's squad.

He has made seven appearances for the Catalan giants in La Liga this season, contributing two goals.

And Pique has been impressed by the Brazil international, in particular with his blossoming relationship with Lionel Messi.

He told the club's official website: "He's shown over these two months that he's going to be an important player for many years.

"He is one of the most talented players I have ever seen. He's got a flying start and over the first five or ten metres he's unstoppable.

"He's also very skilful with his right and left foot and he knows how to take penalties and free-kicks.

"He's a complete player and complements Leo Messi well in terms of getting goals, which is something where he has perhaps lacked support over the last few years."

Barcelona have started the campaign in blistering form, winning all eight of their league matches thus far.

And Pique puts their impressive form down to a tight bond among the squad.

He added: "When you've been in the same team for six seasons, you play a lot of games and that helps to keep you calm.

"This is one of the most open changing rooms I've known and amongst the players we all share and give our opinions.

"Many of us have come up through the ranks at the club and we've known each other for a long time – we speak the same language and we share the responsibility out between us."