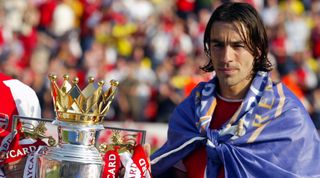 The 10th anniversary of the ‘Invincibles’ has coincided with Chelsea making an imperious start to the current campaign, and led to fans and pundits alike tipping the Stamford Bridge side to repeat the feat.

With only three draws blotting the Blues’ copybook from their opening 14 league fixtures, and tricky encounters at Manchester City, Manchester United and Liverpool already negotiated, it is not entirely inconceivable that with such a plethora of talent at his disposal, Jose Mourinho can mastermind an unbeaten season in 2014/15.

Gunners supremo Arsene Wenger himself has admitted it could be done, insisting football has changed little in the 10 years since.

And Pires, now plying his trade in the Indian Super League with FC Goa, has told FourFourTwo he believes there could well be a team capable of emulating the Gunners pantheon sooner rather than later.

“Of course it can be done again, and why not?” Pires said. “What we achieved was incredible, and it was an honour to work with those players of such ability and a manager who I respected as much as Arsene.

“But football is football. There will always be a team that is better than everyone else. One season is all it takes, and it can happen at any time.

“Arsenal fans will not want to agree, and I am not saying that what we did was not special, it was incredible. Another team repeating what we did does not mean that we achieved will be forgotten.”

The 41-year-old Frenchman, who spent six trophy-ladened years with the north Londoners, also insisted he still looks back fondly on his time in with Arsenal, and still calls England’s capital home.

“It was the best time of my career, for sure,” Pires said. “What we achieved together, and the football we played was something I will never forget.

“I still live in London, my kids have been brought up there. I love Paris, and am very proud to be French, but for me, London is the best city in the world. I love living there.”