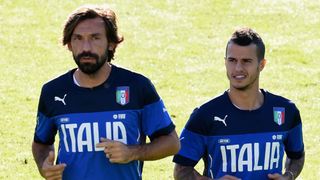 MLS duo Andrea Pirlo and Sebastian Giovinco have both been omitted from Antonio Conte's provisional Italy squad for Euro 2016.

Both were left out of the training camp last week due to commitments with New York City and Toronto, and despite claims from both over the weekend that a spot at the finals was still possible, neither have been included in the 30-man group.

Domenico Berardi of Sassuolo and Sunderland's Fabio Borini, who were both called up last week, have also been cut, though rising Torino star Marco Benassi has retained his place as part of a midfield shorn of the injured Claudio Marchisio and Marco Verratti.

Juventus veterans including Gianluigi Buffon, Leonardo Bonucci and Giorgio Chiellini, along with Manchester United's Matteo Darmian and Paris Saint-Germain goalkeeper Salvatore Sirigu, will link up with the squad after sitting out last week's camp due to domestic cup final commitments.

Italy face Scotland and Finland in friendly matches prior to the start of the finals in France, where they face Belgium, Republic of Ireland and Sweden in Group E.