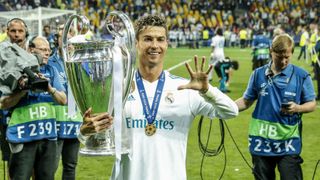 Cristiano Ronaldo's arrival at Juventus can help the Bianconeri end their lengthy wait for Champions League glory, according to legend Andrea Pirlo.

Juve have not been champions of Europe since their 1996 victory over Ajax in Rome, Marcello Lippi's side needing penalties to secure their second crown.

They appeared in the following two finals but were beaten by Borussia Dortmund and Real Madrid, before vying for the title again in 2003 – when they lost a shoot-out to AC Milan.

Massimiliano Allegri has revitalised their fortunes in recent campaigns but the Champions League trophy continues to elude them.

Final defeats to Barcelona in 2015 and Madrid in 2017 kept their barren run going, but Pirlo believes the acquisition of Ronaldo, who has won the competition five times, could change all that.

"Cristiano Ronaldo can bring that something extra, which Juventus need," he told Sky Sports Italia when asked about the €112million signing from Madrid.

"I'm happy that a great champion has joined Juve. Buying a player like him doesn't win you the Champions League alone, but you get a lot closer to it.

"Ronaldo is a player who shifts balances and can help Juventus win the Champions League.

"He's a top player, he'll make the difference and we'll see something beautiful."