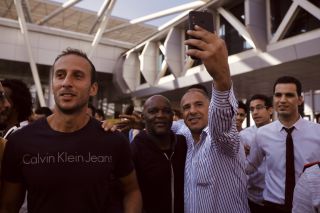 Newly-appointed Al Ahly head coach Pitso Mosimane has urged the club and its supporters to 'give him the space and time' to take the club to the next level.

The 56-year-old coach confirmed his appointed as the Red Devils new head coach on Thursday afternoon after parting ways with Mamelodi Sundowns the previous day.

The Egyptian Premier League side has since revealed that they have reached an agreement with Mosimane to take over Al Ahly for the next two years following the departure of Rene Weiler.

Mosimane will now attend his first training session on Friday as the team prepares for their Egyptian Premier League clash against Al Mokawloon Al Arab SC.

'Salaam alaikum and greetings to everybody at Al Ahly. I would like to thank captain Elkhatib and all the board members at Al Ahly for entrusting me with the difficult task at hand,' Mosimane said in his first interview.

'They have shown confidence in me and they believe I can take the team to a bigger and higher space. It is a compliment to me and I am humbled.

'I also want to thank Amir (Tawfeq) and my agent for facilitating and making this possible as it was smooth, easy and professional.

'Thank you for bringing me to Al Ahly family I appreciate it and I am humbled. I'll do my best to deliver.'

🗣 P.M 🗣“Give me the space, give me the time... i’ll take Al Ahly to the next level.”#PitsoAnnounced #ClubOfTheCentury pic.twitter.com/0hAHXo4pQGOctober 1, 2020