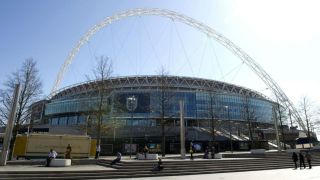 The Football League says all of their play-off finals will go ahead despite the discovery of an unexploded World War II bomb near Wembley Stadium.

Homes and businesses have been forced to evacuate the area due to the bomb, which the British Army states poses a "genuine risk to life".

The Army has built a blast wall around the device, thought to date from German air raids on London in the early 1940s.

Middlesbrough then take on Norwich City in the Championship final on Monday.

A statement from the Football League read: "Relevant authorities are currently working to defuse and remove a World War II Bomb in the vicinity of Wembley Stadium.

"The Football League Play-Off finals remain unaffected and there is no risk to the weekend's fixtures as it stands."