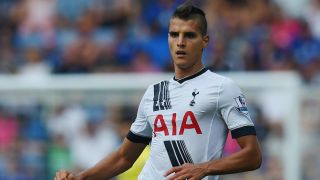 Mauricio Pochettino said Erik Lamela is facing a make-or-break season, with the Tottenham manager calling on his fellow Argentinean to prove his quality.

Lamela has failed to live up to the hype since joining Tottenham for a club record £25.7million in 2013, scoring just two Premier League goals.

The Argentina international was close to leaving White Hart Lane during the transfer window, with Porto and Inter among the reported suitors.

Lamela, however, remains a Tottenham player and the pressure is now on to justify his price tag, according to Pochettino.

"We believe we can develop his game and I think we need to be patient with him," Pochettino said of Lamela, who provided the assist for Ryan Mason's match-winning goal against Sunderland last week.

"It's true, now is the third season here, but we believe in him and we want to give the opportunity to show his value. We have a lot of games to play, for competition, we need a good player in all positions. I think with the squad we have, we have a very good balance.

"I think this is a key season for him. After two seasons at Tottenham, now is the moment for him. Not to put pressure, but it's true. It's a key moment for him to develop and to move on his game. It's important."