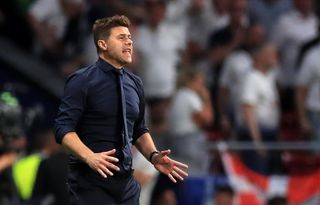 Mauricio Pochettino says Tottenham’s players must stick together and challenged each of them to “be a man” in order to bounce back from their humiliating 7-2 Champions League hammering by Bayern Munich.

The Spurs boss will today hold an inquest into Tuesday’s embarrassing Group B loss at the hands of the Bundelisga champions.

Bayern blitzed the stunned hosts with five second-half goals, four of which were scored by former Arsenal winger Serge Gnabry.

The defeat was the heaviest of Pochettino’s reign and the first time Tottenham had conceded seven goals in a home match.

“This type of situation happens and you need to show your quality like a man first – to face like a professional is like a man,” said Pochettino.

“You need to put your quality, how you are strong like a person to face this type of situation and after is coming the professional side.

“Now we need to be a man and to face that problem and be strong together to try to bounce back and change that feeling.

“I think we are very critical with ourselves and to find always the way to fix a problem. We need to try to move on because I think it’s more psychological now.

“I think the most important now is to have one idea, one analysis, one assessment and we need to stick with this idea and from there start to improve.”

A crestfallen Pochettino called for calm in the immediate aftermath of the drubbing and was keen to avoid making “rash” assessments.

The Argentinian, whose team opened the scoring through Son Heung-min, felt the opening 45 minutes was his side’s best performance of a stuttering start to the campaign.

Goals from Joshua Kimmich and Robert Lewandowski meant the German club led at the interval, before a double from Gnabry put them in complete control.

Harry Kane’s penalty gave Spurs a glimmer of hope but two more from Gnabry and a second for Lewandowski in the final 10 minutes wrapped up a strong showing by the Bavarians.

“You can imagine that we cannot talk now because now is a situation that we need to be calm first, after that we are going to talk tomorrow (Wednesday) but not today,” said Pochettino at his post-match press conference.

“We know how we feel: very disappointed. The feelings are, of course, not so good.

“After a result like today, it’s so important to stay calm, you’re not going to fix nothing shouting or talking when the emotions are on the skin.

“The most important is to stay calm, no rash analysis, no rash assessment, it’s so important now to take a few hours to see what happened.”

“I told you a few months ago that it’s going to be a tough season,” he said.

“For me, after the final of the Champions League it was a chapter closed and now the club is in a period that they need to open another chapter and design a project, medium or long-term.

“It is not because the defeat (on Tuesday) is going to change my opinion.”