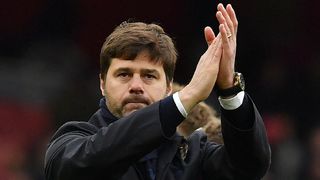 Mauricio Pochettino believes Tottenham are starting to show their real quality after they followed up Saturday's 5-0 thrashing of Swansea City by ending their Wembley hoodoo in the Champions League.

Pochettino's men fell behind to CSKA Moscow against the run of play on Wednesday, but hit back to claim a deserved 3-1 win and third place in Group E as strikes from Dele Alli and Harry Kane were followed by an Igor Akinfeev own goal.

Spurs will now enter the Europa League round of 32, having ended a run of six matches without a win at England's national stadium - their temporary home for European fixtures while construction work takes place at White Hart Lane.

"To win here, that was important for us, to change the bad feeling that was there after [home Champions League defeats to] Monaco and [Bayer] Leverkusen," said Pochettino.

"It was very important that we recover. I think the performance was good.

"I think we are much better after Monaco - our performances against Chelsea [in a 2-1 defeat] and Swansea and today, we are playing better and starting to show our real quality.

"We struggled in the last month and a half because we had some problems, but now we have all the squad nearly fully fit. We are stronger and I think we have recovered that feeling that maybe we lost."

Pochettino insisted Tottenham will take the Europa League seriously, despite acknowledging a sense of regret at dropping out of Europe's premier club competition.

"In the last few years, Tottenham was always playing in the Europa League and that competition was really important for us," he added.

"After fighting a lot last season to play Champions League, we can feel now a little disappointed about that, but the Europa League is an important competition.

"It's a competition that can provide you the possibility to play again in the Champions League, and to win a trophy that is very important in Europe.