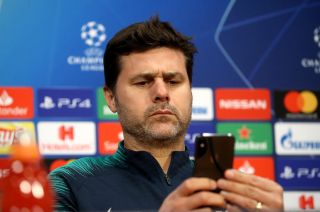 Tottenham could put themselves one win away from a Champions League “miracle” that will leave Mauricio Pochettino pondering his future.

Spurs take on Ajax in the semi-final second-leg in Amsterdam on Wednesday hoping to overturn their 1-0 deficit and book a place in the Madrid final next month.

If Pochettino was somehow able to lead his side to glory in this competition – a feat he has said would be a “miracle” – he admits he would have to think about finding a new challenge.

Cutting a prickly figure throughout a press conference at the Johan Cryuff ArenA on Tuesday, Pochettino, who has been linked with jobs at Manchester United and Real Madrid in the last 12 months, hinted that winning the competition with Spurs would leave him looking for “something different”.

Pushed on the matter further and asked whether he was joking, he added: “It’s not a joke, why? To win the Champions League with Tottenham in these circumstances this season, maybe I need to think about maybe doing something different in the future. Because to repeat the miracle, you know…”

Spurs have history in their grasp as they have never reached the final of the European Cup before and even if they cannot do it on Wednesday, Pochettino reiterated that he is “living the dream”.

“I’m not thinking about if we are creating history or doing something special.

“The most important is to try and enjoy, to try and bring to the players that belief, as we have done to get here but we must also dream.”

He will have Jan Vertonghen available after his head injury, though the defender may have to play in a mask while Erik Lamela is fit again after a hamstring injury.

Harry Kane and Davinson Sanchez, who are in Amsterdam with a watching brief, are unfit.

Ajax are on the brink of their first final since 1995 following their first-leg win in London last week, where they ripped Spurs apart in the first 20 minutes.

They won some silverware on Sunday when they lifted the KNVB Cup, but former Manchester United defender Daley Blind insisted celebrations were tame.

“Most were on the pitch and afterwards we celebrated in the stadium with the fans,” he said.

“After that it was timid, we had food with the players and after that, we went home.

“It wasn’t difficult, right in the moment it’s not. You know what’s coming.”

Blind added: “It’s clear this match was in our thoughts.

“I’m not nervous. I think a little bit of healthy tension is good and comparable to the other matches.

“Just like the other matches, and the group phase, they’re all important matches against big opponents and you have to make the best of it during preparation. You have to do that yourself.”