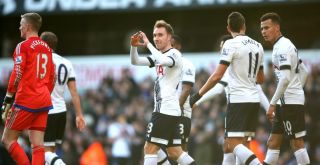 Tottenham manager Mauricio Pochettino has big plans for the future, and none of them involve him leaving White Hart Lane.

Pochettino has built an impressive team at Tottenham and brought massive improvement from young talents such as Harry Kane and Dele Alli.

Should he keep the club in the Premier League title race and secure Champions League qualification, Pochettino could find himself being looked at by the likes of United and Chelsea, but he insists he is only interested in building a big future for Tottenham.

"Always my decisions are for the present but for the future too," Pochettino said.

"I work for if one day I am not here to give the legacy. It's always my way to work not only for the present and for the quick results. It's always to create the future.

"In football you can work only for results and don't think about tomorrow. But for me it's always to try to create good things for the present and for the future too."

Pochettino said he was watching players as young as seven years old in the club's academy set up as he looks ahead for the years to come.

"Tottenham have an unbelievable academy with great potential for the future. Sometimes, we watch the under-8, under-9, under-10s," he said.

"Our passion is to watch football and when you have the possibility to watch, it's a special moment to detect the talent.

The work being done at Tottenham's academy has even sparked the interest of United who are reportedly interested in Spurs' academy chief John McDermott, although Pochettino said the news was a surprise to him.

"That's the first time I've heard that. It surprises me. John is a really important person for me," he said.

"I think after 10 years here you can see the evolution of the players. He is one of the best academy managers that I have met."

Tottenham are in action on Wednesday night in the FA Cup as they take on Leicester City in a third-round replay.