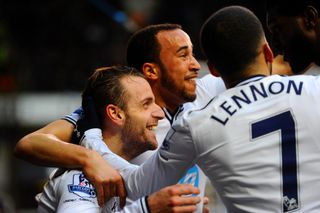 Soldado has been linked with Milan as they look to replace Mario Balotelli, while England winger Townsend is believed to be a target for Pochettino's former club Southampton.

The Argentinian has led Spurs to three wins from three competitive games so far this season, and will hope for a fourth when they host AEL in the UEFA Europa League play-offs on Thursday, holding a 2-1 lead from the first leg in Cyprus.

And with up to four competitions to concern himself with this term, Pochettino is keen to keep hold to as many players as possible.

This includes Soldado, who only managed six Premier League goals after a £28 million move from Valencia last August.

Pochettino said: "Soldado is here, I never talk about any player rumours.

"He is in my plans. For the future? Yes. Yes. We've only had two games in the Premier League and one in the Europa League.

"I believe in all the squad. It is important you know I can only pick 11."

A neck injury will keep Soldado out of Thursday's White Hart Lane clash, but Townsend could be given the chance to impress.

"I think we have to play a lot of games and it is possible you play tomorrow, then don't play in the next Premier League game, but the most important thing is understanding that we need to choose for the games.

"It is only 11 in each game after that another three impact players come in.

"We have an unbelievable squad and my job is not only to put my philosophy in the club or on the pitch on how we need to play, but I need choice and that is my job."