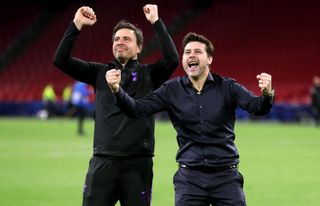 Mauricio Pochettino hailed his Tottenham “superheroes” after they pulled off another Champions League miracle by beating Ajax to set up an all-English final against Liverpool.

Twenty-four hours after the Reds’ comeback against Barcelona, Spurs were dead and buried at half-time of their semi-final second leg in Amsterdam as they trailed 3-0 on aggregate.

But Lucas Moura completed a stunning second-half hat-trick, with the third coming deep into injury time, to sends Spurs through to a first ever Champions League final and spark amazing scenes in the Johan Cryuff ArenA.

Pochettino was reduced to tears after the game after performing what he called a “miracle” and they will now meet Jurgen Klopp’s side in Madrid on June 1.

The Spurs boss, who said on the eve of the game that he could leave the club if he won the competition this season, has long described his players as heroes for performing in tough circumstances this term.

But he has upgraded that description to “superheroes” as he celebrated one of his most significant nights.

“It’s difficult with words to describe my feelings and my emotions,” he said.

“I think it’s one of the most important nights in my life. How the game finished, everything that happened, the first half, how we planned to play, how the plan was down after three minutes when we conceded the goal, and I think everything was amazing.

“The most important thing I want to say is to congratulate my players. They own the football, they delivered a great job.

“For me, they are heroes. I’ve told you the last six months, I repeat this sentence.

“I think they are superheroes now. To get the club to the final of the Champions League I think is very close to a miracle.

“No one believed in us from the beginning of the season. We are so close to the top four and have the opportunity in Madrid to play the final against Liverpool.

“It is an amazing season in our new home. This chapter that we’re going to close now, until June 1, it can be amazing to close the chapter playing a final. In case we won it should be an amazing book.”

Both Liverpool and Spurs may think their name is etched on to the trophy given the manner of their respective comebacks and Pochettino thinks the Madrid showpiece will be a thrilling encounter.

“Allow me to relax a little bit, there is going to be time to talk about Liverpool,” he said.

“I want to congratulate Jurgen Klopp and all the players and Liverpool, because I think they were amazing.

“We enjoyed a lot, watching the tie against Barcelona, they are heroes too and of course it is going to be an amazing final between two English teams that for sure we are going to enjoy.”

For Ajax, a brilliant run in this competition, where they beat Real Madrid and Juventus in previous rounds, ended in the most heartbreaking of ways.

They were seconds away from a first Champions League final since 1996 and with their side set to be picked apart in the summer, they are unlikely to have a better chance of winning European football’s premier club competition than this.

Boss Erik Ten Hag said: “I am very proud of this team and that they have made it this far and the developments in the team. We have had a great run.

“I said it in the dressing room, for today and tomorrow we can find no words.

“We will have to deal with it, we will have to regain our composure, we owe that to ourselves and our fans. We have had a great season.

“I told the players that it was hard to find the words and that football is cruel.

“This is the cruel side that we have to endure tonight. We have to go on, when you are so close, the players realise that and you need time to get that sorted out.”