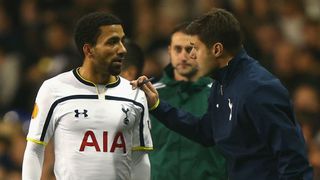 Mauricio Pochettino says Tottenham have reached out to Aaron Lennon to offer their support after the former Spurs star was hospitalised.

Lennon's club Everton announced on Wednesday the 30-year-old attacker is being treated for a stress-related illness.

Capped 21 times by England, the former Leeds United player made over 250 league appearances for Tottenham between 2005 and 2015.

And Pochettino, who briefly managed the winger following his appointment at White Hart Lane in 2014, told a news conference that Spurs stand ready to assist Lennon if required.

"We feel very sorry about the situation with Aaron, we wanted from here to send all our wishes that he recovers soon, him and his family," he said.

"The club is in contact with his agent now, trying to see what we can do to help him.