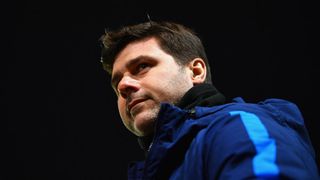 Padraig Amond's header had the League Two outfit on track for a famous upset at Rodney Parade before Kane tapped in at the back post in the closing stages on Saturday.

Newport earn a lucrative replay at Wembley as a result but Pochettino was unimpressed with a flat performance from Spurs despite the Argentine having named a strong team.

"A little bit relieved, well a lot," Pochettino told reporters. "We were very disappointed with the first half, in the last half hour we created some chances and deserved the draw.

"We lost every challenge in the first half, difficult to play forward and always playing safe. The team didn't really show that they wanted to go through to the next round.

"If we want to go to the next step we need to be strong. That is the competition. We showed the ambition and the decision to play.

"We want to go further and try to fight to win the competition. We need to be more motivated though."

Spurs have been linked with moves for Lucas Moura of Paris Saint-Germain and Bordeaux winger Malcom to boost their attacking options.

But Pochettino would not be drawn on whether the club was likely to conclude any deals before the transfer window closes on Wednesday.

"There are a lot of rumours about different players," Pochettino added. "We'll see what happens in the next few days."