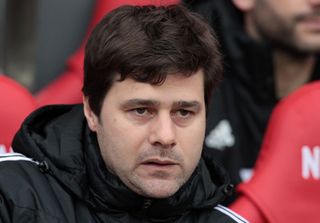 Pochettino's men had much the better of the first half at St Mary's and led at the break thanks to a 21st-minute header from Jose Fonte.

Goals from Olivier Giroud and Santi Cazorla in the opening seven minutes of the second half put Arsenal ahead, but Adam Lallana converted Jay Rodriguez's cutback just two minutes later to frustrate the London side.

Mathieu Flamini was sent off for the visitors for a two-footed lunge on Morgan Schneiderlin in the 80th minute, but although Southampton pressed hard in the final stages, they could not claim the winner that Pochettino felt they merited.

"I thought the result was good but we deserved to win the game," he said.

"We deserved a bit more. Overall, I want to congratulate the players because they played really well.

"That’s the thing about football, you can make mistakes, and when you make mistakes against a team like Arsenal it's a heavy price to pay.

"We felt positive and optimistic about the future, I think we can continue to play well from this moment on."