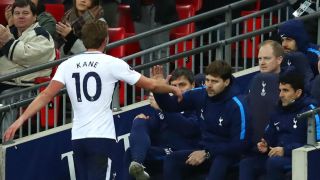 Kane's double was crucial as Spurs saw off AFC Wimbledon 3-0 in the FA Cup third round on Sunday.

The England international had not been expected to feature at Wembley, but he captained Spurs and scored two goals in the space of 111 seconds after the League One side had earlier hit the crossbar.

Philippe Coutinho's £142million move from Liverpool to Barcelona has cast a long shadow over third-round weekend and Pochettino has seen his star man linked with a move to Real Madrid in recent months.

Like the rest of the Premier League's front-runners, Spurs look unable to chase down Manchester City, so going better than last term's run to the FA Cup semi-finals could be crucial in keeping hold of Kane.

"I think Harry is special. He loves Tottenham and he feels Tottenham," Pochettino said of his star striker, who scored 56 goals in 2017.

"But we need to be careful and clear in how we manage him. Then the player needs to choose to stay here. You cannot force everyone to stay here.

"Our job is to try to work together and try to achieve everything we want. Of course, Harry is a special player. He seems like [Roma legend, Francesco Totti].

"Only a few players can stay at a club their whole career and Kane can be someone like that. But in football nothing is sure.

"Today is today and after tomorrow you always doubt what happens. So it's important that we must achieve everything we want together."