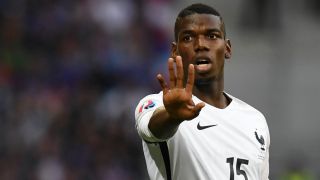 Real Madrid legend Raul believes Paul Pogba would be a fine addition for the club if they can get him for the right price.

The France international has a contract with Juventus until June 2019, but he has been heavily linked with a move elsewhere in recent months.

Manchester United are believed to be keen to lure him back to Old Trafford, while Madrid are allegedly in the running to sign the 23-year-old as well.

Raul is a keen admirer of the midfielder, but feels Juventus' asking price could prove to be a problem, with the Serie A champions reportedly holding out for a transfer fee in excess of €100 million.

"Pogba is a player that Madrid would love to have - as would any team," Raul told AS.

"He has a great physical presence.

"Pogba is an excellent player and I am sure that the coach will have studied on how he can improve the current team and style of play.

"But it will be a question of looking at factors such as price and general conditions."

Raul previously conceded he was surprised to see Zinedine Zidane become Real Madrid coach, but has been impressed with the progress his former team-mate has made.

"I just didn't see him as a coach when we played together, but he's since worked in different areas of the club, spent some time working with [Carlo] Ancelotti and was then given the opportunity to oversee Castilla so I guess it was always something that he had inside," Raul added.

"I also feel that since he's been with the first team he is growing constantly as a coach.

"The key to his success? Having faith in his players and getting them to believe in themselves."