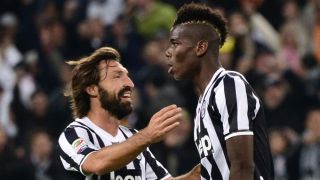 Andrea Pirlo hailed former Juventus team-mate Paul Pogba as the best young prospect he has seen throughout his career.

The pair featured alongside one another under Antonio Conte as Juve claimed three successive Scudetti between 2013 and 2015, before Pirlo left for New York City last year.

Pogba departed Manchester United in 2012 after refusing to sign a new contract and was snapped up by the Turin giants.

The young Frenchman immediately impressed the World Cup-winning midfielder, who feels he is continuing to improve as he develops physically.

"Pogba is the best youngster I have seen. We understood he was a great player from his first training session," Pirlo told La Gazzetta dello Sport.

"He was skinny but his legs allowed him to be everywhere. Now he is bigger and stronger."

Pogba came to be seen as Pirlo's heir in the Juve midfield, while Lazio's Danilo Cataldi and Marco Verratti of Paris Saint-Germain have received a similar tag in relation to the national team.

However, Pirlo disagrees with such suggestions, adding: "Cataldi is different as he is more of a box-to-box midfielder.

"Verratti isn't like me either, but he is a player that can play in the national team for the next 20 years."

The 36-year-old also questioned the attitude of young players in the modern game, suggesting many are more interest in the limelight than pushing for success.

"Now a youngster trains with the first team and they think they have made it. The most important thing is to be there and take pictures," said Pirlo.

"There are some [who are more professional]. [Juventus defender] Daniele Rugani is one, while [Fiorentina forward] Federico Bernardeschi is a serious professional, though I don't know him as well.

"People say that youngsters don't play in Italy but look at [16-year-old AC Milan goalkeeper] Gianluigi Donnarumma. If you are good enough, you will play."