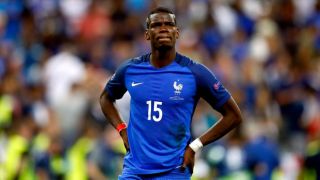 Former Manchester United defender Rio Ferdinand believes the arrival of Paul Pogba from Juventus could signal the start of a new era of success at Old Trafford.

Pogba featured for United between 2009 and 2012, but opted to leave when his contract expired due to his lack of playing time.

The 23-year-old has since developed into one of the most sought-after midfielders in world football and recent reports suggest United are willing to pay a world-record €120 million to lure him back to Manchester.

And Ferdinand believes Pogba could prove worth the hefty outlay.

"I think €120 million is a lot of money, for any player. You'd expect 40-plus goals per season for that figure," Ferdinand told Copa90.

"But Pogba is going to be the best midfielder in the world in the next couple of years. He is a leader, who will grow into an even better leader.

"He could be the start of a new generation of football at Manchester United, given that opportunity.

"Manchester United have a strong attack. It's the midfield and the defence that needs strengthening."

Jose Mourinho is about to embark on his first season since replacing Louis van Gaal as manager, the Dutchman – who led United to FA Cup glory – paying the price for a perceived negative style of play and failure to finish in the Champions League places.

And Ferdinand believes United have snapped up the Portuguese at the perfect stage in his career.

"When you have a manager with Mourinho's ability, you always have a chance of winning the league," he added.

"It's unheard of for Manchester United to be saying you want to finish in a Champions League position. In my days, the goal was to win the league.

"United got Mourinho at the best time possible. Winners are dangerous when they're wounded. He's focused.

"He has a lot of work to do at United, because they finished fifth last season and were not good enough to get into the Champions League."