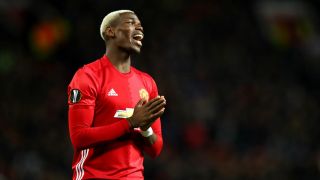 The France international has netted only four goals in 29 Premier League appearances since his return to Old Trafford for a world-record fee ahead of the 2016-17 campaign, attracting some criticism.

Nevertheless, Lingard believes Pogba just needed some time to get used to the English top flight again after four years in Serie A and has backed the 24-year-old to deliver next season.

"It is obviously his first year [back] in the Premier League and it was going to take some getting used to," Lingard was quoted as saying by Sky Sports.

"It is the luck he has had this season. We know he is a world-class player, he has helped the team a lot and I do not see why he will not go on next season and score the goals he has missed this season.

"You see the power he has, the stature he possesses in midfield, no one can get near him and when he plays those throughballs we are always running for them. We need to finish more of them."