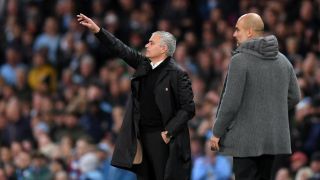 Paul Pogba's injury threw Manchester United because it forced them to start an unfit Marouane Fellaini in Sunday's 3-1 derby defeat to Manchester City, according to Jose Mourinho.

Reports on Friday claimed Pogba was a doubt after missing training and such speculation proved to be accurate, with the France international missing the game at the Etihad Stadium.

Without Pogba United struggled in midfield, with the trio of Ander Herrera, Nemanja Matic and Fellaini offering little expertise in possession.

And while Mourinho rued Pogba's absence, he actually placed more importance on how the injury forced Fellaini to play a full 90 minutes earlier than he should have.

"It's not me to speak about a player who was not there after a defeat," Mourinho told Sky Sports.

We fall to defeat in the Manchester derby. November 11, 2018

"Of course, we missed him and one thing that broke a lot our plan was the fact Fellaini had to start [in Pogba's place], because he wasn't in the condition to play 90 minutes.

"He was phenomenal in his effort, but he wasn't in condition to do it. Imagine this game with Fellaini fresh coming on for the final 20 minutes."

David de Gea was the target of criticism for City's second goal, as a Sergio Aguero shot flew straight between his arms.

But Mourinho refused to point the finger, rather pointing out United simply should not have lost the ball in midfield.