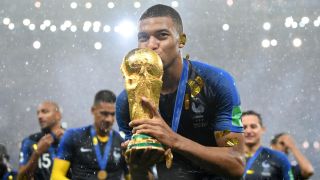 Deschamps followed up his 1998 success as a player by leading Les Bleus to glory at Russia 2018, his side beating Croatia 4-2 in a thrilling final in Moscow.

Deschamps insisted a France star should be in contention for the Ballon d'Or, breaking a 10-year run of dominance from Cristiano Ronaldo and Lionel Messi, but would not name his favourite for the prize.

"We've seen so many times, there are two who are still there... Come on, even three, you have Messi, Ronaldo with everything they represent in the world and what they do. Neymar too, even if he arrives behind.

"Does Raphael Varane deserve it? Of course he deserves it. Will it be him? A defender, yes, but in general it's an attacker. I especially hope that it will be a French player due to the fact that it's a World Cup year and they are world champions.

"Kylian, he's only 19 years old, we'll say he has time [to win the Ballon d'Or]. But there is also what he does. Being so important and effective at age 19, it is out of the ordinary.

Griezmann was third in the 2016 Ballon d'Or, with Kaka's success in 2007 the last time Messi or Ronaldo did not claim the prize.