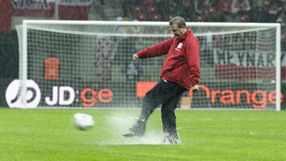 The game was rearranged for 15:00GMT on Wednesday, but the Polish FA was facing an immediate backlash after the decision to leave the retractable roof open despite the city suffering from a sustained storm.

"We were made into a laughing stock," said former Poland international Tomasz Iwan.

Thousands of fans were angered after being kept at the stadium while authorities waited in vain to see if the Group H fixture could go ahead later on Tuesday evening.

But shortly after 19:45, with the pitch in places resembling a paddling pool and referee Gianluca Rocchi having conducted a second and final pitch inspection, the game was called off and the players returned to their hotels.

A Polish FA spokeswoman said neither of the side' representatives nor the FIFA delegate wanted to make the decision to close the roof.

"None of the sides wanted such a solution," said Agnieszka Olejkowska. "We knew there would be heavy rain but we could not 100 percent predict the downpour."

A spokesperson for the National Sports Centre, which operates the 58,000-seater stadium built to host the European Championship in June, said: "There is a functioning drainage system but with this amount of rain falling continuously, no system could get rid of this amount of water."

The roof was eventually closed at 22:20 GMT on Tuesday, with the groundstaff tasked with making sure the pitch is playable by Wednesday.

England manager Roy Hodgson said he had no idea why the roof was not closed earlier on Tuesday.

"That's something I can't answer," he said.

"You will have to speak to the Polish authorities. I am rather hoping they will get it closed now and start work on the pitch as the water is lying on the surface and it will need a lot of attention if we are going to play."

He added: "It was pretty obvious to me early on that this game was not going to be played. But I understand the referee wanted to examine every possibility.

"It's a disaster for the Polish FA, who had a big crowd. We've got a problem now of having to re-prepare. Our players have to do things all over again. No one's a winner in this situation."

His Polish counterpart, Waldemar Fornalik, wanted to move the match to mid-November but was resigned to playing on Wednesday.

"You can play on any pitch, but the question is how such play would look," he told reporters. "I am surprised that after such a rainfall the pitch was in such a state."

English FA official Adrian Bevington said: "There's two things to this: clearly there's a huge problem there for the supporters who have travelled all this way, and the Polish fans who have travelled around their country... but likewise, you have also got to take into account the safety of the players, and that pitch tonight was no way playable from a safety point of view."

When the sides meet on Wednesday, England will be aiming to maintain their long unbeaten streak against Poland and their place at the top of qualifying Group H.

Hodgson said he would pick the same team for Wednesday, and hoped his players would be as well prepared as they had been on Tuesday.

The manager, though, was not likely to be fazed by the inconvenience. Asked if he had experienced a late postponement before, the 65-year-old said: "Funnily enough, yes. In 1987, when my Malmo team were all set to play Ajax, a snow storm came in and covered the pitch in snow and caused the game to be postponed for a couple of days."