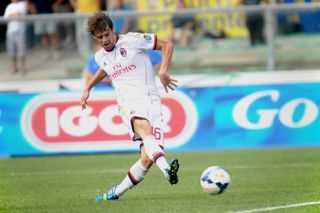 Stephan El Shaarawy headed home from close range in the 15th minute against the run of play, after the Dutch side had made a strong start to the match.

That pressure eventually paid off as Tim Matavz equalised after the break, but Milan will hope to capitalise on the home advantage in the return leg.

But Poli - who joined from Sampdoria in July - will not be banking on any luck for his side, after they went down 2-1 to newly promoted Verona on Sunday.

Luca Toni scored two headed goals to cancel out an effort from Poli and the midfielder is determined to make up for that disappointment at San Siro and reach Europe's premier club competition.

"I'm happy about my goal but not about the loss," he told the club's official website. "We wanted to start well but we didn't manage it.

"Luckily we have another big game coming up and we can get back on track. Yesterday's loss was a bad performance. It's been analysed and we want to put it behind us as soon as we can - starting on Wednesday.

"We have a lot of games ahead of us and Wednesday's will be fundamental. We played a positive game in the first leg but we know we'll be up against a good team.

"We have to get through at all costs and we have all the right ingredients to do it."