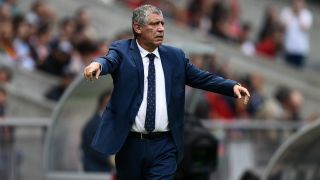 Portugal head coach Fernando Santos said the European champions have plenty of room for improvement heading into the World Cup following their 3-0 win over Algeria.

Cristiano Ronaldo returned as Portugal prepared for the Russia showpiece with a routine victory against Algeria thanks to Goncalo Guedes' brace Thursday.

Guedes produced an eye-catching performance with goals either side of half-time to give Portugal a boost ahead of their Group B opener against Spain in Sochi June 15.

"We are still far from ideal, it is with the championship that we will grow," Santos said in Lisbon post-match.

"There are some things to fine-tune, there are players who are playing for the first time together in this selection."

Paris Saint-Germain winger Guedes – who spent the season on loan at Valencia – upstaged Ronaldo in his 150th international appearance.

Bruno Fernando also opened his account for Portugal in the first half as Santos' men ended their three-match winless run.

"There were good things, but there are things to improve," Santos added. "In the first 20 or 25 minutes the team were good, compact and quick to react to the ball.

"If their strikers did not shine, it's a lot of merit for my team. We made a goal in that period and we could have done more.

"Thereafter we slowed down, but then we got back to normal, there were spaces to make goals and we did."

Santos continued: "You cannot draw any conclusions from this game. Obviously we are getting closer to the starting XI, but the most important thing is to feel that I have 23 players prepared to compete."