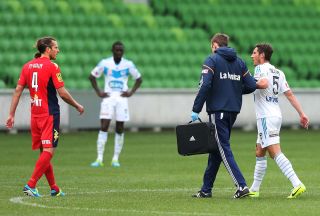 It validates Ange Postecoglou's calls last week for the midfielder to stay home.

Milligan is on the way back to Australia and has also been ruled out of the Socceroos' friendly against Canada after his ongoing knee problem flared.

Milligan arrived in Paris on the weekend hoping the injury would heal in time for the match at Parc des Princes but will now target a return for Melbourne Victory in their second-round A-League clash against Adelaide United.

No additional players will be added to the Socceroos squad.

Victory coach Postecoglou said on Friday that he tried to convince the Socceroos camp that Milligan should never have made the journey to France.

"Our medical department wrote to FFA and explained the situation and our strong recommendation was he wouldn't travel. We didn't think he'd be right," Postecoglou said.

"To be honest I don't think the trip did him any good. Our preference was he stayed here, but they wanted him over there to check him out.

"It's been a bit of a fruitless trip for him. We'll see what kind of condition he's in when he gets back, but reports are it's kind of gone backwards rather than progressed.

On the back of last month's 6-0 thrashing against Brazil, Australia are aiming for a much-improved showing against 25th-ranked France, who are still to qualify for the World Cup.

There is speculation another heavy loss could cost head coach Holger Osieck his job.

Tommy Oar (back) and Dario Vidosic (groin) trained away from the main group and are also under fitness clouds.

The Socceroos have at least received a boost with news France are set to be without a host of star players, including injured Arsenal centre back Laurent Koscielny, as they eye their World Cup qualifier against Finland next week.