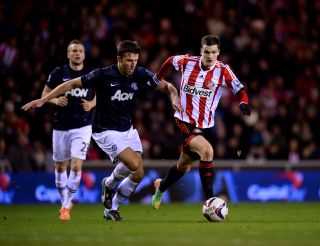 The 26-year-old came on as a substitute for Emanuele Giaccherini and put in a lively performance at the Stadium of Light, including drawing the foul for the penalty that Fabio Borini smashed home to hand Sunderland a slender semi-final first-leg advantage.

Sunderland moved ahead in first-half injury time when Ryan Giggs scored at the wrong end while attempting to clear Wes Brown's cut-back.

United equalised shortly after the break when Nemanja Vidic rose highest to head Adnan Januzaj's corner firmly beyond Vito Mannone, but the home side were not to be denied as Johnson was fouled in the box by Tom Cleverley, allowing Borini to snatch the win from 12 yards.

Poyet's men had to withstand heavy pressure in the final 15 minutes, but they stood firm to record the club's first victory over United since a 2-1 League Cup triumph in November 2000.

And the Uruguayan hailed Johnson's influence, telling Sky Sports News: "He made my day because we were desperate for him to do well.

Sunderland's run in the competition has proved a welcome distraction from their poor Premier League form, which has seen them slip to the bottom of the table.

They beat Chelsea in the quarter-finals to set up their tie with United, and Poyet admits his side performing well against the big teams in the League Cup while failing to beat fellow strugglers in the league is an unusual situation.

He added: "It's something very strange but with the way we are playing maybe, it is suited to playing against the big teams. It was a a very tight game, and sometimes a decision goes for you and you win the game.

"We need to change something (if we are to improve against teams at the bottom)."

The return leg takes place at Old Trafford on January 22, and Poyet realises there is still a huge challenge ahead to reach the final at Wembley.

"We know it's not easy to beat Manchester United but now we go to Old Trafford with a lead. It's been a long time since we were in a final so we will try our best," he added.