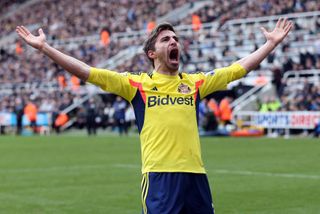 The Italy international is currently on a season-long loan at Sunderland from Premier League high-fliers Liverpool.

Borini has proved a fan favourite at Sunderland with a series of committed performances.

Poyet is keen to keep hold of the forward, but concedes Sunderland, who currently sit 18th in England's top flight, will have to beat the drop for that to be possible.

"Borini is an important player, and he will be important to us if we stay in the Premier League, and are able to keep him," Poyet told The Shields Gazette.

Poyet also credited striker Jozy Altidore for his performance in a 0-0 draw with Crystal Palace at the weekend.

Altidore had been left out of Sunderland's 3-1 defeat to Manchester City in the League Cup final, but Poyet believes the American responded in the right manner after replacing Steven Fletcher as a half-time substitute on Saturday.

He added: "Jozy came in with the right attitude and did well. He had a great chance but the keeper made an important save."