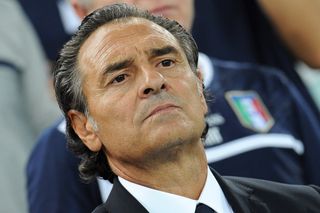 Daniel Pablo Osvaldo broke the deadlock for Italy only for Arsenal striker Nicklas Bendtner to equalise before he then popped up with what appeared to be a crucial winner 12 minutes from time.

But Italy were not to be denied as Alberto Aquilani netted in time added on to leave Denmark level on points with Bulgaria ahead of their final Group B clash against Malta on Tuesday night. The Bulgarians - who have a better goal difference - are at home to the Czech Republic, while Italy qualified for next year's showpiece event last month.

Prandelli was disappointed with the lapse in concentration shown by his players despite seeing them salvage a point right at the death.

"We suffered above all at the start of the second half, as for 20 minutes we focused only on defending," the Italy coach told Rai Sport in Copenhagen.

"This team is accustomed to playing and taking control, so if we lose that then we become vulnerable. Once we began playing again we created some good chances. Denmark had to win and therefore gave perhaps even more than they had, but we got the draw.

"We know there are moments where you mustn't drop the concentration. We dropped back by 10 metres before the break and allowed Denmark to put those crosses in.

"We moved the ball around fairly well, kept the ball to feet and had a great chance with Claudio Marchisio. Clearly we were also lucky with Denmark hitting the woodwork twice, but those were on set-plays."