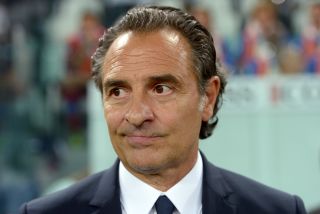 The Azzurri have already secured their spot at Brazil 2014 with a healthy eight-point lead atop their table, while the Armenians remain in contention for the play-off spot along with Bulgaria, Denmark and the Czech Republic.

Prandelli flagged potential issues for the 2006 World Cup winners, though, as he felt they had lost their way after their 2-2 draw in Denmark on Friday.

"I'm quite worried because the concentration has been lost in the last few days," the Italian said.

"I'm concerned but I usually change my mind when I see the team working on the pitch, therefore I could be slightly less worried after today's training session.

"I wouldn't say this is a difficult moment but I would say it is an important one.

"We have already qualified, therefore there are no difficulties but we have to play well."

Prandelli was well aware of Armenia's motivation and also of their counter-attacking threats.

"It becomes difficult and complicated because we'll be playing against a team in Armenia that still has a chance to the play-offs in second position in this group," Prandelli said.

"They will be very determined.

"They have four players who are very good at the counter-attack and are very difficult to mark.

"Tomorrow we have to be good at preventing them from having an impact.

"This is why I'm worried.

"But this isn't a difficult moment because we have to be proud for what we have achieved.

"In any case we have to play well and create chances like we made in the first half of the match against Denmark."

Giuseppe Rossi could make his first international start since October 2011 and Prandelli wants to ease the injury-prone Fiorentina man back into the national team as seamlessly as possible.

"I've spoken with Giuseppe Rossi and he knows that in these two matches I want to let him feel at ease again in the atmosphere of the national team and with the players he may be playing with," Prandelli said.

"Initially I didn't want force him up onto the pitch and put his recovery in danger, but I'll let him play for a few minutes, if the match proceeds as expected."