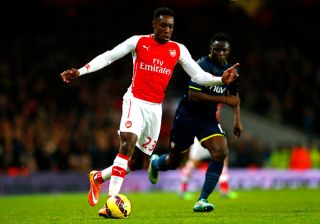 It looked like being yet another frustrating night for the Emirates Stadium faithful as Fraser Forster put on a goalkeeping masterclass to sensationally deny Danny Welbeck twice and Olivier Giroud late on.

Southampton had chances of their own, though neither Graziano Pelle nor Shane Long could find the target, but Forster was the star of the show and did not deserve to be on the losing side.

However, Sanchez popped up in the last two minutes from close range to net his 14th goal of an impressive campaign in all competitions.

It provided Arsene Wenger with some welcome relief after some fans made their displeasure known following Saturday's slim 1-0 victory at West Brom, with Arsenal's top-four hopes receiving a major boost.

Wenger chose to start former Southampton man Alex Oxlade-Chamberlain instead of Giroud as Sanchez moved into the central role up front, with Welbeck kept out wide despite his winner at The Hawthorns.

The Frenchman's opposite number Koeman was without the injured Morgan Schneiderlin, so Jack Cork was one of two changes.

Southampton won at the Emirates in the League Cup earlier this season and almost shocked their hosts again after 14 minutes when Pelle played a neat one-two with Steven Davis, whose cushioned header found the Italian in the area but he blasted over.

At the other end, Oxlade-Chamberlain forced a fine low save from Forster after pinching the loose ball in the area and finding space to fire goalwards when surrounded by opposing defenders.

Oxlade-Chamberlain was at the heart of Arsenal's best moves and it was his low cross that found its way to Welbeck after 35 minutes, but the striker had to improvise with a backheel and could only find the side netting from close range.

Southampton were grateful to Forster in first-half injury time as he showed great reflexes to tip over a Welbeck header and keep his side on level terms.

Stung into action, Southampton started the second half impressively, with Pelle forcing a vital block from Laurent Koscielny and a lightning break after 52 minutes saw Victor Wanyama feed Long, who could only fire high and wide.

Giroud was introduced to provide some much-needed impetus and he got on the end of a Sanchez pass after 66 minutes to unleash a fierce drive that Forster palmed away.

The Southampton stopper was at it again a minute later as Giroud's neat touch found Welbeck in the box and his shot was somehow clawed away along with the rebound from the French forward.

Forster produced an even better save to tip away a Giroud header late on but, just as it looked like a point was secured, Aaron Ramsey found space to cross and Sanchez was in the right place to sweep home the winner.