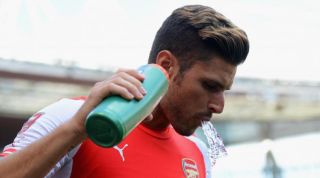 First-half goals from Seamus Coleman and Steven Naismith had Roberto Martinez's side firmly in command as Arsenal laboured on the back of their midweek UEFA Champions League exertions in Turkey against Besiktas.

But Aaron Ramsey bounced back from his red card on Tuesday night to net his third goal in as many domestic appearances this term before half-time substitute Giroud headed home from Nacho Monreal's 90th-minute cross after Everton had allowed the full-back far too much time on the left byline.

For the majority of the match, Everton gave a compelling demonstration of how well they can compete with the sides that finished above them on bigger budgets last season.

Ramsey and Giroud then showed how hard overhauling the big boys will prove to be for Martinez's enterprising team.

Despite scoring on the opening weekend against Leicester City, Aiden McGeady dropped to the Everton bench as Belgium forward Kevin Mirallas earned a starting role.

Arsenal welcomed back Germany World Cup winners Per Mertesacker and Mesut Ozil, while Alexis Sanchez was handed a central striking role for the first time by Arsene Wenger.

Steven Pienaar's early departure through injury appeared to unsettle Everton and a badly misjudged 15th-minute clearance by Coleman saw Alex Oxlade-Chamberlain shoot narrowly wide from the edge of the area.

Coleman soon settled his and Everton's nerves, though, when he stole in behind Ozil to head home Gareth Barry's sublime 19th-minute cross.

Three minutes later, Naismith flicked on another excellent lofted pass from Barry to send Mirallas bearing down on goal, but he could only stab wide under pressure from Calum Chambers and Arsenal goalkeeper Wojciech Szczesny.

Mirallas then grazed the top of the netting with a 35th-minute free-kick before, just as it appeared Arsenal had weathered the storm, Everton doubled their advantage on the stroke of half-time.

Romelu Lukaku sent Mertesacker tumbling and raced towards the visitors' goal, eventually picking the perfect pass for Naismith to produce a measured finish - despite strong suspicions of offside.

Wenger replaced Alexis with Giroud at half-time and the France striker almost made an instant impact, smashing a volley over on the end of Oxlade-Chamberlain's raking pass within a minute of the restart.

Barry continued to orchestrate the play wonderfully for Everton in midfield and Jack Wilshere offered a demonstration of Arsenal's frustrations when he scythed through his one-time England team-mate and was shown a deserved yellow card.

Ramsey played in Giroud to rifle a shot narrowly wide from the edge of the area midway through the second half before the Welsh midfielder drew a sharp stop from Tim Howard as Arsenal sought to launch a final assault.

Santi Cazorla - on for the ineffective WIlshere - injected some clever footwork and an excellent low cross for Ramsey to reduce the arrears with six minutes remaining, clearing the way for Giroud to steal the headlines.