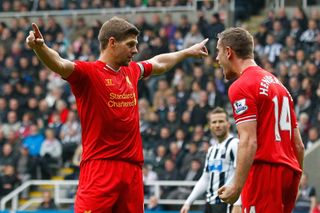 Brendan Rodgers' side had to twice come from behind to earn a point at St James' Park on a day that saw Gerrard become the 24th player to reach the milestone of a century of goals in the Premier League.

Strikes from Yohan Cabaye and Paul Dummett had twice put Alan Pardew’s side ahead, only for Gerrard and Sturridge to equalise.

Cabaye opened the scoring midway through the first half with a dipping strike from long range, but Gerrard brought Liverpool level from the spot after Mapou Yanga-Mbiwa had been dismissed for fouling Luis Suarez in the box.

Newcastle went back in front with Dummett’s first goal for the club just before the hour, but Sturridge then equalised with 18 minutes remaining after excellent work from Suarez.

Both sides made two changes from their matches before the international break, with Glen Johnson and Aly Cissokho coming in for Raheem Sterling and Jose Enrique - who was ruled out with a knee injury - for Liverpool.

Meanwhile, Yanga-Mbiwa and Yoan Gouffran were named in the Newcastle side with Alan Pardew dropping Papiss Cisse to the bench. Captain Fabricio Coloccini was unavailable with a groin problem.

A tentative start from both teams saw a lack of goalmouth action in the opening 20 minutes, with Liverpool looking the most threatening on the counter.

But, after Rodgers’ men had wasted two good opportunities from set-pieces, it was Newcastle who opened the scoring in sensational fashion through Cabaye.

The France international received a pass on the halfway line and moved towards goal before arrowing a 35-yard drive past Simon Mignolet into the bottom corner on 23 minutes.

However, Gerrard levelled for the visitors from the spot with five minutes of the half remaining after Suarez was felled by Yanga-Mbiwa.

The defender was given a straight red card for denying the Liverpool forward a clear goalscoring opportunity, and Gerrard punished Pardew’s side further as he calmly converted from 12 yards for his 100th top-flight goal.

Despite being a man short, Newcastle roared back into life in the second half and went back in front just before the hour through Dummett.

Cabaye fired a free-kick into the penalty area, Liverpool failed to clear and the substitute ghosted in at the back post to stroke past Mignolet from close range.

But Rodgers’ side were back on level terms with 18 minutes to play when Sturridge nodded home a cross from Suarez.

Moses combined well with Suarez, and the Uruguayan clipped the ball into the six-yard box for Sturridge to notch his seventh Premier League goal of the campaign.

Liverpool had late chances through Jordan Henderson and Suarez but they were unable to find a way past an inspired Tim Krul and had to settle for a point.