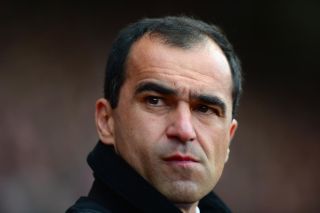 The Merseysiders came into Saturday's game at St Mary's Stadium looking for a win to take them above Arsenal and into fourth, with Arsene Wenger's side not playing until Monday.

However, a nightmare start saw them fall behind inside a minute as Antolin Alcaraz's spectacular error put the hosts ahead.

Having benefited from three own goals themselves in recent weeks, the visitors were their own worst enemies on this occasion and their task became tougher after the half-hour as Seamus Coleman turned into his net.

Southampton are now six points clear of Newcastle United - Arsenal's next opponents - and remain on course to equal their highest Premier League finish of eighth.

Everton remain a point behind Arsenal and Roberto Martinez looks as though he may have to wait another year at least to achieve his aim of taking the club into the UEFA Champions League.

Martinez's side could hardly have made a worse start to the game. They coughed up possession from kick-off and the ball eventually found Rickie Lambert, whose inswinging cross from the left was headed past Tim Howard by a flying Alcaraz.

A lack of cutting edge in attack hampered Everton and they almost conceded again 20 minutes in as Steven Davis turned wide from 12 yards after another swift break down their right flank.

Coleman's attacking instincts were giving Southampton space, but a rare foray down the opposite side of the pitch led to the hosts' second.

Nathaniel Clyne zipped up the wing and clipped in a deep cross that John Stones failed to clear, giving Coleman no time to readjust, the ball bouncing off his forehead and into the net.

Romelu Lukaku headed over from four yards as Everton sought a way back into the contest, but they were fortunate not to concede a penalty as Stones appeared to handle Adam Lallana's cross.

Martinez introduced Leon Osman and Aiden McGeady in an attempt to spark life into his attack, but Lambert came close to a Southampton third as his 59th-minute free-kick nicked the outside of Howard's left-hand post.

McGeady's trickery on the left presented Lukaku with another glorious chance to score, but he planted a header straight at Artur Boruc.

Everton's challenge largely fizzled out as Southampton dominated the ball, consigning the Merseyside club to their fifth successive winless trip to St Mary's.

Having cost former boss David Moyes his job at Manchester United by extinguishing their hopes of reaching the Champions League last week, Everton's own bid now looks in serious jeopardy.