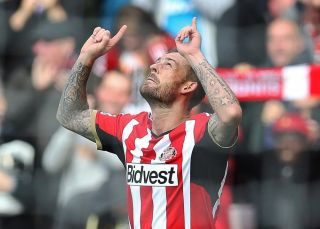 Steven Fletcher, who had not found the net since December's 2-2 draw with Cardiff City, had a hand in all three Sunderland goals as Gus Poyet's men picked up maximum points at the seventh attempt.

Connor Wickham got Sunderland off to an ideal start by heading home his maiden league goal of the season just five minutes in from Fletcher's delivery.

However, Poyet was left to rue some sloppy defending as Charlie Adam levelled 10 minutes later.

Having laid on the opener, it was then Fletcher's turn to get on the scoresheet as he restored Sunderland's lead midway through the opening period with a well-placed header, following a quick corner from the hosts.

Fletcher, brought into Poyet's starting XI along with Jordi Gomez, eventually wrapped up the points with a close-range finish late on, the goal owing much to a superb run from Wickham.

That enabled Sunderland to see off Mark Hughes' men and gain revenge for their League Cup defeat to Stoke last month.

Hughes was forced into making one change, with Marko Arnautovic coming in for the injured Mame Biram Diouf, but it was Sunderland who made a positive start, which paid dividends when Wickham stole in ahead of Phil Bardsley to convert Fletcher's cross from the right.

Steven N'Zonzi spurned an opportunity to draw Stoke level soon after, his tame effort from the edge of the area barely troubling Vito Mannone, yet Adam made no mistake when equalising against the run of play.

Taking advantage of a static Sunderland defence, Adam fired past Mannone and into the bottom-right corner after receiving a pass from Victor Moses.

Stoke's joy was somewhat curtailed when Moses was forced off, seemingly due to a problem with his troublesome thigh.

Having regained a foothold in the game, Stoke then fell behind as Fletcher out-jumped Marc Wilson and found the far corner to end his long wait for a goal.

Chances continued to come the way of both teams in an entertaining affair and Ryan Shawcross almost scored on his 27th birthday with a header that crept just over the crossbar prior to the half-hour mark.

Will Buckley's looping cross from the right nearly caught out Stoke goalkeeper Asmir Begovic and Peter Crouch's acrobatic effort tested Mannone prior to the interval.

The second half began in frantic fashion, although clear-cut chances were at a premium initially as Sunderland's defence stood firm amid plenty of Stoke possession.

Other than Sebastian Larsson's fierce delivery, which evaded Fletcher and Wickham, both sides struggled to forge opportunities in a scrappy period that saw a flurry of bookings.

Fletcher then put paid to any hopes of a Stoke comeback when he added his second 11 minutes from time following strong running from Wickham, ensuring Stoke tasted defeat on the road for the first time since April.