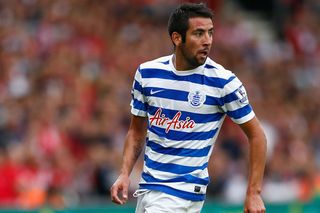 Chile international Isla joined promoted QPR on a season-long loan from Italian champions Juventus before the start of the 2014-15 campaign.

Isla has featured in all but one of QPR's six Premier League fixtures, only missing their season opener against Hull City due to his international clearance not being completed in time.

The 26-year-old has since faced Tottenham, Sunderland, Manchester United, Stoke City and Southampton and he feels England's top flight is superior to Serie A, where he spent seven years plying his trade.

"It's a wonderful step in my career for many reasons," Isla told Perform.

"Coming to play here in the Premier League is good for me because it's really good football with many strong teams.

"I came into a club with many players with experience such as Rio Ferdinand, [Shaun] Wright-Phillips or [Adel] Taarabt. QPR are a respectful team, which is fine playing in the Premier League.

"I have noticed the change [between Premier League and Serie A] in many ways. Here you can find seven or eight teams fighting for the title. The others are strong too.

"In Italy normally Juventus, Milan and Rome, which have been great the last two seasons, fight for the title and here there are seven or eight and those ones going to the Championship is quite tough."

Isla also said that adapting to the pace of the Premier League had been tough.

"I think it's been difficult for me because coming to the Premier league, after playing for seven years in Italy is difficult to change because the pace is heavier here," he added.