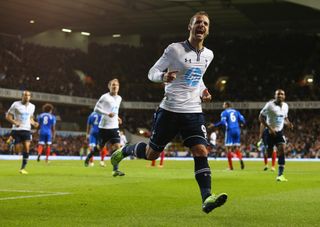 Tottenham were far from being at their best and looked set to drop more points at home until Ahmed Elmohamady was adjudged to have handled Jan Vertonghen's cross 12 minutes from time and Soldado scored the resulting spot-kick.

Hull felt hard done when referee Michael Oliver pointed to the spot after looking set for a hard-earned point despite being without several key players.

Victory for Tottenham lifted them up to fourth in the table as they secured their first home win in three games.

However, there was concern for the hosts when England winger Andros Townsend crashed over the advertising hoardings soon after Soldado's goal and received treatment for some time before returning.

Villas-Boas made one change to the Tottenham side that won at Aston Villa in their last Premier League outing, Gylfi Sigurdsson dropping to the bench as Aaron Lennon started.

Goalkeeper Steve Harper made his first league start for depleted Hull as one of six alterations to the team beaten at Everton last weekend.

On-loan Hull midfielder Jake Livermore was ineligible to face his parent club, but Tom Huddlestone lined up against his former employers.

Brazil midfielder Paulinho had the first clear-cut chance of a frantic first half after 10 minutes when he got on the end of Lewis Holtby's dangerous free-kick but narrowly cleared Harper's bar from close range.

Harper was called into action five minutes later when in-form winger Townsend tried his luck from 20 yards, but the Hull keeper got down to palm the ball away.

The visitors showed attacking intent of their own and striker Yannick Sagbo burst into the penalty area before forcing a save out of Hugo Lloris.

Hull appealed for a penalty when Paul McShane tangled with Kyle Walker 22 minutes in, but referee Oliver saw nothing untoward.

Huddlestone almost ended his long goal drought in spectacular fashion when volleying just over the bar from 20 yards, while Walker's venomous drive was palmed away by Harper at the other end.

Villas-Boas replaced Sandro with Mousa Dembele at the break and Soldado had his first sight of goal nine minutes into the second half when Towsend played him in, Harper making a fine save at full stretch to deny the former Valencia striker.

After further dogged resistance from Hull, Tottenham were then awarded a penalty when Vertonghen's cross struck Elmohamady's arm and Oliver pointed to the spot.

Soldado stepped up to casually send Harper the wrong way and lift the tension at White Hart Lane.

There was concern for Townsend when he went over the advertising boards at full tilt, but he was able to return and Spurs survived a late scare when Huddlestone blasted a free-kick wide in the closing seconds.