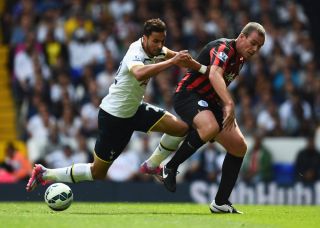 Redknapp was dismissed by Tottenham in 2012 despite guiding the club to three consecutive top-five finishes in the Premier League, before winning promotion from the Championship with QPR last term.

But his former employers were less than hospitable on the 67-year-old's return to north London.

Nacer Chadli deservedly gave the home side the lead 12 minutes in, before Eric Dier followed up his goal at West Ham on the opening weekend by netting the second.

Chadli added a third eight minutes before the break, before Emmanuel Adebayor made absolutely certain with a fourth in the 65th minute.

The result sees Tottenham maintain their winning start to the 2014-15 campaign, while QPR are left searching for their first points since returning to the top flight.

Redknapp handed debuts to Mauricio Isla - on loan from Juventus - and Leroy Fer, who arrived from Norwich City earlier this week, while Erik Lamela made his first Premier League start at White Hart Lane, six days short of a year since he became Tottenham's record signing.

It was the home side who applied all of the pressure early on - Adebayor nodding narrowly over from a Nabil Bentaleb cross - and it was not long before they were in front.

Adebayor turned provider as he dinked a cross in from the left, and Chadli took the ball down wonderfully on his chest before poking it beyond Robert Green in the QPR net.

QPR were giving Tottenham far too much space, and Mauricio Pochettino's men could have been further in front two minutes later had Adebayor capped off a swift counter-attacking move with a better finish.

It was becoming clear that QPR would need to make the best of any opportunities that fell their way.

However, when Matt Phillips cut inside Younes Kaboul in the penalty area after meeting a long-range pass, he fluffed the finish by clearing the crossbar.

The visitors were very nearly punished moments later when Christian Eriksen rattled the crossbar from a 25-yard free-kick, but Dier then powered home a header on the half-hour mark for his second goal in as many matches, leaving a glum-looking Redknapp scratching his head on the QPR bench.

Chadli doubled his tally seven minutes later, placing a header into the bottom-left corner from a chipped Lamela cross after a rampant Tottenham had strung together an incredible 48 passes in the build-up.

Tottenham old boy Steven Caulker got a rare glimpse of goal for QPR shortly after the break, but placed his header a yard wide of the right-hand post from a corner, before Adebayor slid the ball past Green for a fourth after being teed up by Danny Rose.

Rose almost gave QPR a hand nine minutes from time when he diverted the ball into his own net, but the referee disallowed the goal for an infringement on the full-back, leaving the visitors to mull over a dismal performance in which they rarely looked like troubling Tottenham goalkeeper Hugo Lloris.