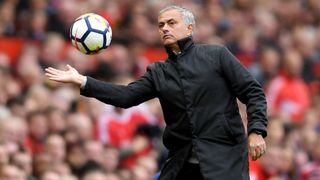 Manchester United will come unstuck against Liverpool at Anfield on Saturday because Jose Mourinho's men are "under pressure" to go "all-out attack", according to John Barnes.

United go into the match joint-top of the Premier League with Manchester City on 19 points after an excellent start to the season, while Liverpool trail by seven points already.

Saturday's trip to Anfield is expected to be their biggest test of the season so far, as United are yet to face another team from last season's top six.

And Barnes is confident Liverpool will prevail, suggesting United's apparent need to go all-out attack – despite Mourinho's reputation as a pragmatist – is likely to work against them.

Barnes told talkSPORT: "Why I think Liverpool will win this is because of what Liverpool have demonstrated against all of the top teams, apart from Manchester City when they went down to 10 men and lost 5-0.

"They have had the upper hand against all of the top teams because of the nature of the way those games are played. They are very open; they are very attack-minded. One team attacks and leaves the defence to defend for themselves.

"If you go head to head with Liverpool rather than sitting in deep and defending in numbers to stop Mane, Salah, Firmino, you come a cropper and that is what has happened to Arsenal, Chelsea, Tottenham.

"If they go all-out attack against Liverpool, which they are under pressure do because they are Man United and they are top of the league, then I think Liverpool will win."