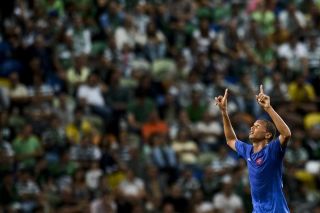 Fifth place was up for grabs at Estadio do Restelo after Sporting Lisbon were beaten 3-0 by high-flying Vitoria Guimaraes on Saturday.

And Belenenses took full advantage of Sporting's slip up, with Brazilian striker Deyverson's first-half brace inspiring the hosts' to their fifth league win of the 2014-15 campaign.

Belenenses are fifth - one point ahead of Sporting - with 17 points from nine games, while 16th-placed Boavista languish just three points above the relegation zone.

But that is as good as it got for the visiting side, with Belenenses scoring twice before half-time.

Deyverson netted his second of the game on the half-hour mark, taking his season tally in the league to seven goals.

And Portuguese midfielder Miguel Rosa put the game beyond doubt four minutes later as Boavista were condemned to a third league defeat in a row.