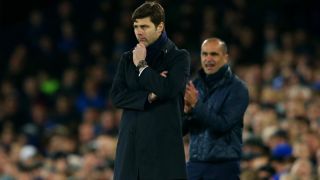 Mauricio Pochettino is proud of Tottenham's performance away to Everton but was disappointed to leave Goodison Park with just one point.

Having dominated the first half, the visitors fell behind to Aaron Lennon's opener.

And while Dele Alli equalised just before half-time, Spurs struggled to create many meaningful opportunities in the second half and Everton finished the game as the stronger side.

Pochettino claimed he was content with what he saw from his players but was left frustrated by their inability to create a winner.

"We dropped two points," he said.

"[The] first half was one of our best performances so far, you could see that by the way we played.

"[In the] second half we managed the game until 75 minutes and at this moment Everton increased their level. But we need to feel proud, our performance was very good and we're only a little disappointed with the result.

"We gave some space but only because we were attacking and trying to get three points.

"The goal [from Alli] was fantastic. But the team was good, they showed maturity and belief in the way we play. It was a very tough game."

Pochettino refused to specify any objectives for Tottenham this season but is delighted with the ambition his young squad have demonstrated so far, with Spurs fourth on the table, three points clear of fifth-placed Manchester United.

"It's too early to speak about a challenge or achievement at the end of the season. Everything can happen, we believe in the way we play, we're very ambitious," he added.

"The players now are disappointed in the changing room because our feeling is we dropped two points, but this is good. It's a very good signal for the future.

"We have the youngest squad in the Premier League but we're showing a winning mentality, which is very good for the future."