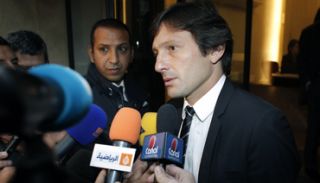 Television footage showed Brazilian Leonardo bumping into referee Alexandre Castro with his left shoulder in the Parc des Princes tunnel after Ligue 1 champions PSG drew 1-1 with Valenciennes in Ligue 1 on May 5.

"The [disciplinary] commission hands him a nine-month ban," the LFP said in a statement, adding that Leonardo was banned from the bench, the referees' dressing-room and from all official functions.

The club was quick to react to the news by issuing a statement expressing their support for the Brazilian.

PSG were also handed a suspended three-point deduction over the incident for the 2013/14 season.

Leonardo, whose suspension runs from May 8, had denied pushing the referee, saying he was shoved towards Castro by the match delegate.

"The commission's task was to decide whether the shoulder barge was intentional," commission president Pascal Garibian told a news conference.

Leonardo, the former Inter and AC Milan manager, received a two-match suspended ban in November from the French federation's Ethics Committee for criticising the referee after Mamadou Sakho was sent off in a league game at Montpellier.

Leonardo's latest suspension is a huge blow for PSG, who are reportedly seeking a replacement for Italian coach Carlo Ancelotti who has said he wants to leave the club.

Leonardo would be on the short-list to replace Ancelotti who is under contract with PSG until June 2014.