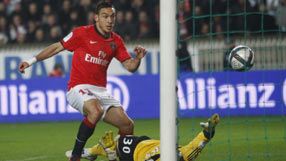 Turkey striker Erding opened the scoring after nine minutes and France forward Hoarau struck 10 minutes later as PSG, who have 19 points from 12 games, moved up to third.

They are one point ahead of Marseille, who replied with a Lucho Gonzalez goal midway through the first half, although the champions have a game in hand in fourth position.

Promoted Brest lead the way on 21 points despite conceding their first goal in nine league matches in a 3-1 defeat at Lille.

Stade Rennes, who were held 1-1 by Olympique Lyon on Saturday, are in second spot, one point off the pace.

Racing Lens extended their unbeaten run to four matches with a 2-0 win against Montpellier but are still second from bottom, level on points with 18th-placed Monaco who demolished Nancy 4-0 away.

At the Parc des Princes, strikers Hoarau and Erding led PSG to their first home win over Marseille in six years.

Erding poked the ball home after a mistake from visiting keeper Steve Mandanda.

Hoarau then pounced on a subtle Nene lob over the defence to fire between Mandanda's legs.

Lucho pulled a goal back in the 23rd minute for Marseille who could not count on the backing of their supporters as the French League had banned away fans for security reasons.

Marseille enjoyed lots of possession after the break but PSG were content to just sit back and wait, though Apoula Edel was forced into two good saves.

"We got off to a bad start and paid dearly for it. It's not the end of the world," Marseille defender Souleymane Diawara told French TV channel Canal Plus.

Coach Didier Deschamps blamed the police for failing to clear the roads properly as his players arrived at the ground late.

"We did not have a good preparation. We just got there one hour before kick-off," he told a news conference.