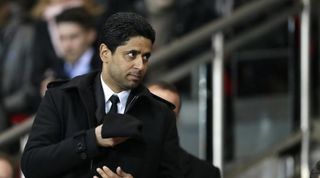 Footage shows the Bastia striker involved in a confrontation with the PSG midfielder in the tunnel after the French champions' 2-0 Ligue 1 victory at Parc des Princes on Saturday.

Pictures have also surfaced showing Motta with a bloodied nose following the incident, with initial reports suggesting it is broken.

And Al-Khelaifi has called on the authorities to come down hard on Brandao, who was making just his second appearance in a Bastia shirt.

"What is happening, it's very serious," he said. "This is very serious for French football. Not just for Paris Saint-Germain.

"Now the league and referees will have to make a decision. I hope the decision will be a life ban. It's a bad image for French football.

"I looked at the video. I was not there. He strikes the head. The doctor told me at 90 per cent he has broken his nose.

"Really, this is very serious for us, for French football, for everyone. We are now waiting to see what the referees will do. It's a bad image for football.

"[If PSG lodge a complaint] It's not against Bastia, it's against the player. We do everything to protect our players. This is our responsibility.

"Of course, we will lodge a complaint against the player immediately."